It’s getting tougher and tougher for Obama to make the case that “A John McCain presidency would be four more years of the Bush White House.” Hell, it might just be McCain’s campaign theme the final weeks heading into the election, with Obama as the apparent continuation of the unpopular lame duck prick from Texas.

Yet another former Bush lacky has latched onto the Obama wagon of hope, and it appears even Dick Cheney and Scooter Libby could be stumping for him within days.

Former Bush press secretary, Scott McClellan, didn’t exactly shock the world with his endorsement of Obama, for his Bush-bashing book spelled the end of his role in W’s reign of terror months ago. However, it does highlight just how badly the country wants to move in a new direction, so much so two former Bush officials have crossed parties in less than a week.

To assert such endorsements could have been possible even 4 years ago would be utterly ridiculous, like Lindsey Lohan advocating abstinence.

So who’s next? Condi? Dick? The First Lady? Bush himself?

I wouldn’t bet on any of them. Nor would I bet on anyone with adequate brain functioning ever possibly buying the absurdities McCain’s been trumpeting about being the candidate who will bring about actual change in Washington.

Not when your own party members see it for the crockpot of bubbling shit that it is. Not when your idea of change means courting around an Alaskan power-mongering farce who can’t even dress herself. Not when you’ve been frequenting Washington cocktail parties for 26 years, rubbing elbows and trading favors with the same bloodthirsty lobbyists you’d supposedly go after if elected.

Not when your name is John McCain and everybody agrees your record is commendable, but your yellow and bloodshot eyes illuminate the greedy and vindictive truth that has been your work, your life, your being.

Not when the country is ready for something new.

Filed under Corrupting the News

Colin Powell endorsed Barack Obama. Didn’t see that one coming, did you?

Well, it’s not exactly “Britney’s prego again!” breaking news, but a simple reminder of how fragmented the Bush administration has been.

Essentially the White House has been fractured into two parts – W and all the good old boys like Mean Dick, Rove, Scooter, and the like…and then everyone else, namely the disillusioned few W has told to fuck off a time or two before.

Perhaps there’s nothing wrong with this. America wants a leader. Someone to tell Gorbachev to wipe the Soviet tears from his eyes and do away with the walls of terror and injustice.

But when does the cowboy finally saddle over the line? At what point do the congenial PTA-parents, church-going do-gooders, and everyday brown-nosing sandbaggers finally say, “Does this lunatic listen to anyone?” 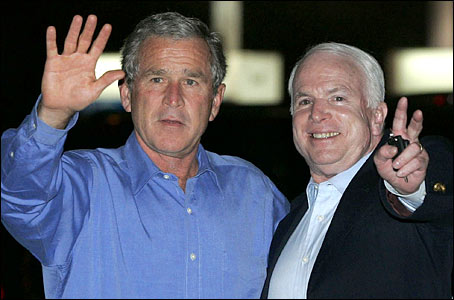 That should be our most pressing concern in regards to drawing Bush-McCain comparisons. Not the “90 percent of the time” or “Four more years of failed economic policy” or “10 billion dollars a month in Iraq.”

Those lines are trivial garbage, for certainly the most jagged scars on the ass of W’s presidency won’t be the doomed policies he insisted on perpetuating, but the actual insistence with which he implemented them.

Many presidents employ fallacies for policies, which can often be attributed to the incompetence of a collective cabinet. But not Bush. No, his problem is the arrogant, recluse manner in which he made his every decision.

And a McCain presidency promises more of the same.

Never mind the occupation of Iraq, the slumping economy, and the erratic immigration – these issues are frightening, yet no more so than the social cancers that lurched in the American bellies of yesteryear.

So it is imperative the country’s leaders begin taking a collective and all-inclusive approach to these problems.

Only then will our leaders prove triumphant once again. Citizens will rejoice. Confetti will rain on Times Square. Even Tara Reid’s saggy sack of cottage cheese in back won’t appear as gruesome.

But such a scenarior will never materialize behind the leadership of yet another “cowboy” or “maverick” or “reformer” or “friendless straight talking renegade.”

“Talk softly and carry a big stick,” is what Teddy Roosevelt used to say.

Maybe when historians reflect on a Barack Obama presidency they will attribute a similarly epic and transcendent phrase – “Listen closely and never act alone.”