Bush and Obama put Presidency above Politics – Frighten the Children

Barack Obama’s first trip to the White House as President-Elect is big news. Not really, but at least the mainstream media thinks so. It’s a swell photo opportunity for capturing worthless pictures of Presidents No. 43 and 44 waving, both grinning like bastards while sharing jokes (unfunny to the rest of mankind) about how cool it is possessing powers the rest of the air-breathing world will never know (like tapping Kim Kardashian’s cell phone to see what kind of naughty things her and Reggie Bush talk about…My guess? Her huge donkey ass, but never mind that). 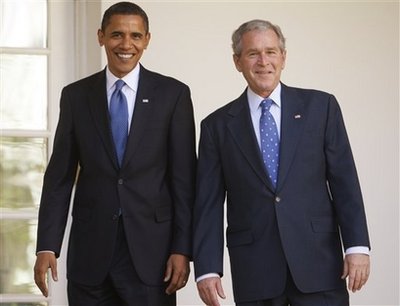 Obama and Bush smile as they consider just how much they really hate each other.

Most of their Oval Office visit will be comprised of mindless nonsense, as Bush offers Obama a few unsolicited words of advice, all the while biting his tongue and suppressing the urge to leap over his desk and rip Obama’s freaking throat out for dragging his name through the mud everyday of the last two years. Conversely, Obama will brandish that 70-tooth smile, fending off the mounting need for doubling over in laughter as Bush spews his bullshit about “what it takes to be a great president.”

As if you know, Obama will think. But what can he say? It’s all trivial posturing for the sole purpose of convincing the drunken, maladroit androids of the country that politicking is a necessary evil, however, in the end we all love each other like dogs in heat and need to get along. After all, it’s not a red America and a blue America, but a country that loves football and hates terrorists. So lets all get hosed and roast a jihad or two…maybe even bring a tournament to college football before the year 2020. Whatever.

And Michelle and Laura will do their own little tea-slurping ditty, and Entertainment Tonight will feature some 30-second bit about the current First Lady suggesting the Obama’s get a terrier or some shit like that. No one will remember three days from now, but it’s good filler today.

The travesty of it all is that the MSM dropped the ball on the main story here. With so much focus on Presidents shmoozing and First Ladies cooing, non-existent was the coverage of what terrifying and haunting things must be rattling the minds of young Malia and Sasha Obama. After two consecutive years of hearing George W. Bush is the goddamn devil, how could these girls step foot in his house without fearing some ill fate, like jagged blades or raging flames disfiguring their bodies permanently?

I have no clue how these brave young women did it. I just know I wouldn’t have been able to. Not a chance in hell.